skip to main | skip to sidebar

A search warrant was obtained Thursday afternoon to search property on Bonds Road in southern McCracken County belonging to 28-year-old Chad A. Phillips.This after animal control responded to complaints of a neglected horse.

Officers discovered the horse, reportedly emaciated and tied to a log with no access to food, water, or shelter. Additionally, multiple dead chickens were located in the yard, in cages and other locations on the property. A dead calf was located in a stock trailer.

The horse was seized by animal control and taken to a secure location for treatment. The calf was removed by the county road department.

Phillips was arrested on five counts of second-degree animal cruelty and taken to the McCracken County Regional Jail.


More than a dozen horses had to be rescued from a Garrard County farm from, what one animal rescue group called, a catastrophic situation.

This started yesterday when animal control, a vet and others received calls about horses not being cared fro properly.

LEX18 is told it got so bad they had to euthanize a couple of the horses right away
LEX 18 cameras were rolling as the rescue was underway, loading 13 of the horses into trailers.
Garrard County Animal Control says about four of the horses died on the property from malnutrition and starvation.

The person who owned the horses told officials he fell on hard times and was trying to do the best he could to care for the animals.

Buckland Equine Rescue was the re and said this is a problem they are hearing more of lately. They'd like to hear from people struggling to take care of their horses sooner rather than later.
"It's much harder for us to do our job then. If you call and say 'hey I'm in trouble, I need to get rid of them,' it lets us set up to find places before they get into trouble," said Chris Takacs from Buckland Equine Rescue. "The problem, you see, here nobody got in touch with anybody that could help them out."

This case is still under investigation by Garrard County Animal Control. They say once the rescued horses are back up to health they'll be ready for adoption
Lex18

Sixteen dead horses, a dead donkey and numerous dead dogs, cats and chickens were found in a barn on a Woodford County farm Monday afternoon.

The farm at 1975 Woodlake Road is leased by Cheryll Jeffers, who also goes by the last name Ford, said Sgt. Keith Broughton of the Woodford County Sheriff's Department.

Woodford County animal control officers, the sheriff's office and representatives of the Kentucky Department of Agriculture visited the farm about 3:30 p.m. and found the animals.

Broughton said it was unclear whether Jeffers would face charges.
"We're still in the investigative stage," he said.

Broughton said the animals "were all in various stages of decomposition," including some that were skeletonized or mummified.

"Some of them have been dead for several months," he said.

In addition to the dead animals, there were about 15 horses and "numerous" cats, chickens and dogs on the property.

Broughton said a local farm had donated hay for the horses.

"They probably are a little bit neglected," he said, adding that water was being taken from the house on the property to the horses because there was no running water to the barn.

He said Jeffers had agreed to turn over the dogs to animal control officers, who were taking them to the Woodford County animal shelter.

Broughton said Woodford County Animal Control was in charge of the investigation.

A woman accused in a Woodford County animal cruelty case has pleaded guilty.

Cheryl Ford was charged with second-degree animal cruelty after authorities found 16 dead horses, along with dead dogs, chickens and donkeys at a farm off Woodlake Road in Midway. Ford surrendered about 50 dogs and cats to authorities.

In the plea deal, Ford pled guilty to four counts animal cruelty second degree and two counts of failure to dispose of a carcass. She was sentenced to six months jail time, with 90 days served in jail and the remainder on home incarceration. Ford's attorney claims she's not medically able to stay in jail.

Ford's attorney says she's a woman who got in over her head after a nasty divorce and couldn't care for herself... much less the animals.

Ford will be on probation for two years, and is not allowed to own animals during her probation.

Formal sentencing in the case is set for September.
LEX18

Posted by speakupforhorses at 10:06 PM No comments: 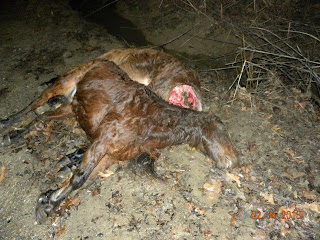 Two horses were found dead near a creek in Union County late Monday night, and right now, authorities are not sure who dumped them there.
The horses were found in the Highland Creek area, just off Kentucky 360 near the community of Hitesville.
On Tuesday, a member of a local saddle club tells 14 News, many residents are unsure of who to contact when they discover a situation like this one.
"This just, this is awful," Jarrad Rudd said.

Union County resident Jarrad Rudd belongs to a local saddle club and says, Tuesday morning, he was fielding a lot of calls from concerned residents who saw the two ponies, one of those, not completely intact late Monday night.

"People here don't want to treat their horses like this. I didn't understand what happened to them. They looked like they were well cared for," Rudd said.

Rudd tells 14 News that he put in a call to the state veterinarian, but with no animal control in the county, he wasn't sure who was responsible for taking care of the situation.
14 News called Judge-Executive Jody Jenkins who says he hadn't heard about the horses.
"It was obviously careless and reckless on whoever that animal owner was," Jenkins said.

Jenkins tells 14 News that he contacted the Kentucky Department of Agriculture and their employees came to check out the scene.

Jenkins says he's never seen anything like this in Union County.

Animal lovers like Rudd are just hoping nothing like this happens again.
"What's happened here, we don't understand it," Rudd told 14 News.

The judge-executive says if residents see something like this in the future, they can contact his office or the sheriff's office.

According to locals, the owner of the two dead horses is known and he currently has another horse starving on his property. Picture that was taken of the starving horse: 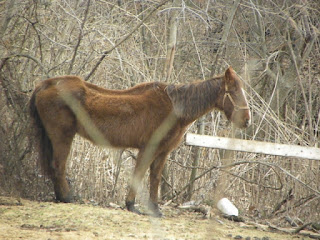 Posted by speakupforhorses at 7:21 PM No comments:

Our Education Program in the NEWS

Kentucky ranks last in the nation for animal protection